At the end of the day, it's all meaningless. 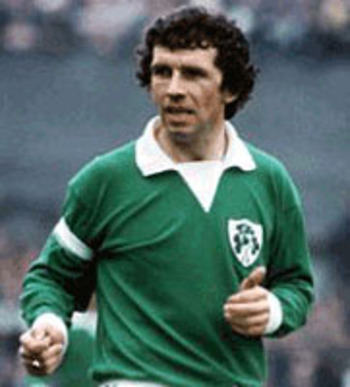 I have read alarmingly few football books. I'm yet to read any of Eamon Dunphy's output, aside from his Roy Keane biography, nor Hunter Davies, nor Phil Ball. I've read a lot of David Conn's articles, but none of his books. I've read almost nothing.

So far I've tended to keep to the 'tell-all' end of the market, focusing on the biographies of the 'troubled geniuses'; Paul McGrath's Back from the Brink, which started off as a revealing and enlightening insight into a severely damaged upbringing/abandonment and its effect (he spent 6 months at the age of 19 bed-ridden in a psychiatric ward) which by the end had descended (at least for me) into a non-stop litany of matter-of-fact results from such damage, now almost devoid of any context (You drank a pint of Domestos? Wow, what happened next?); Tony Adam's Addicted which hinted at a depth of knowledge and understanding which has been decidedly missing from his management career so far; I even scanned through Stan Collymore's Stan: Tackling My Demons to see what titillating pleasures may be derived ('I leaned in the window and had a bit of a fiddle with the wife', oh that's quality dogging Stan. Roy Evans' daughter, tee-hee).

To readdress this imbalance I visited my local library and picked up Jonathon Wilson's highly-praised Inverting the Pyramid, on the evolution of football tactics. (While I was there I also picked up Richard Williams' The Perfect 10, wherein he dedicates a single chapter each to ten seminal players who played in the number 10 position. I'm, unfairly, wary of anything Williams writes since hearing his 'John Lennon review story'*, but the chapter on Ferenc Puskas which I have read so far was excellent. I'm more confident of getting through this than the Wilson book to be honest.)

Wilson's introduction points at the fundamental difficulty many in this part of the world have in investing too much credence in the over-riding importance of tactics on football matches. His description of a fellow writer casually mentioning that in the end it comes down to the ability of the eleven players on the field seems not to be a self-serving manufactured argument but is quite representative of many in these isles (I'm not 100% sure on which side I come down myself, I'm looking forward to seeing what sway Wilson's book will have on me). This argument, that 'tactics are overrated', is one that I often hear coming at me through my TV screen, by another character from one of my few football reads, John Giles.

David Peace's The Damned United was an incendiary read for me, far better than I had anticipated and quickly encouraged me to find all his books. The Brian Clough of the novel was a powerful creation and seemed to encapsulate not just a lost character but a lost nation (Although I was born as long ago as 1980, the idea of Englishmen being such titans of industry seems alien to me. This period of the novel, when the largest and most powerful, not just football clubs but businesses and services and systems and finances were run by Englishmen and according to English principles, for all the flaws, is something I didn't really see growing up. England used to be so big. Perhaps it's Ireland's increase that has affected this view, but only to a small extent I believe.) The strongest critique of the book I saw argued that the tone was too retrospective and that Peace had taken the Clough we had seen at the end of his career (bitter, disappointed, failing) and transplanted him back to a time when he was in fact much more successful and balanced. This is a strong argument, but I can't help feeling that Peace nailed it. The man, the time, the country. Everything.

Everything includes The Irishman, Johnny Giles, menacingly stalking Clough during his 44 days and greeting all Clough's difficulties with pitiless mirth, 'laughing like a big, black fucking dog'. While Giles successfully sued the author, and later editions have been amended to reflect this, a part of me, perhaps unfairly, believes that Giles would not have brought the case had he not been afraid there was a little truth in the portrayal. A truth I think is evident in Giles' role on Tv.

As a Tv pundit Giles is notoriously non-plussed. Non-plussed by players. Non-plussed by managers . Non-plussed by those sitting beside him. (This has seeped into the public's perception of him and his representative character on the popular parody Apres Match bears an almost permanent look of detached bemusement, as though he can't actually believe the silliness of everything and every one.) He is certainly no ignoramus on football tactics but his overarching concern seems to be character. Mourinho is a good manager far more because of his personality than his tactical acumen. Ferguson's greatest quality according to Giles is his trust in his players, a trust Giles certainly doesn't share in the current crop. Players know is one of his favourite arguments. They know what to do and when to do it and if they don't no tactical change is going to educate or improve them. It may come down to semantics of course as what most refer to as tactics Giles calls 'good defending' etc. It's nonetheless surprising that someone who has played under such renowned managers in Busby and Revie is so dismissive of the job. Despite becoming a manager himself his faith and credence lies squarely with individual players. And John isn't impressed much.

The underlying impression is that it's the tacticians who are the spoofers to Giles. The chancers coming along after the fact to portray the action as a result of planned, by themselves, actions and procedures. Giles seems to have no credence in these charlatans. The question is does this come from lessons learned from experience - Giles pedigree as a footballer is often under-emphasised, maybe due to the timing of his career; he's neither fully of the glorious 1960s (despite making his debut for Manchester United in 1959) nor violent 1970s (despite playing until 1980) but straddles the period a little uncomfortably.

Or is it something deeper, a view Peace appears to hold. In the book, when Clough tries to get Giles onside by excitedly detailing his plans for the future he is met only by Giles' steadfast rebuttal that Giles is concerned only with the past, not the future. While most probably factually incorrect, it succinctly elucidates a type of fatalism rooted in many Irish people, a hopelessness born of shameful history. It's not that we don't think it can be done, it's just that we don't place any stock in it. It could all fall apart tomorrow anyway, why bother building it so carefully?

After I read the book I googled Giles a bit and came across a revealing and strikingly open interview he had given to the Evening Herald which I can't find now unfortunately. In it Giles talked about a period when he was aged about 29 as the only time he had significant doubts in his life. His daily routine had become monotonous. He trained, had lunch, had a nap, had dinner, went to bed. Probably a more accurate description of a footballer's life than the tabloids present. Wondering if he could be bothered carrying his career on much longer he took a trip home to Dublin and when there went out with his father. His father was an unsuccessful footballer who was at his element in a crowd. Popular and enthusiastic, a jack-the-lad celebrating all his seconds on earth. Giles described this meeting as a little epiphany that ensured him his own life was fine. Strengthened by the weakness of others he left for home.

This is not so far from The Irishman of Peace's book I feel. The life of a footballer, certainly in the 70s, was most likely a dull and fairly prosaic existence. Would his father's carefree lifestyle not have been even a little desirable. No, here was one more spoofer. Another know-nothing in a bar tediously detailing his might-bes and could-haves. But the beer soaked bar-fly is no more of a chancer to be dismissed than the earnest tactical professor with his statistics and clip-boards. John places no great merit in either.

* If anybody wants to know the Williams/Lennon story - while in his role reviewing music (for Melody Maker?) he was commissioned to review one of John Lennon's new releases (The Wedding Album?). The advance copy he received was pressed up on double vinyl but is only a single vinyl record so two sides were naturally blank. Williams however went on to review it as a double lp, praising the blank sides as audacious experiments etc. I mean it just goes to show you, they think they know everything but they don't know as much...HEY! HEY, WHERE ARE YOU GOING? I'M TALKING TO YOU. I'M SAYING, IT JUST GOES TO SHOW...
Posted by vieiraswearyone at 4:28 PM